From City of Titans Wiki
Jump to: navigation, search

It is expected that City of Titans will offer a near-equal level of power customization that will be compariable to their costume and character customization.

How powers work and function on a developmental level are going to be far different than what they've been depicted as in other MMOs. Normally, attacks in MMORPGs come in many forms: abilities, spells, skills, attacks, powers, etc. City of Titans is a superhero game so naturally they take the form of powers and as a superhero game, one would expect that powers are nothing more but a particular combination of particle effects (which may or may not be customizable) and a mechanical effect (damage, stun, resistance to damage, etc).

This is NOT the case for City of Titans.

A term coined by the very developers at Missing Worlds Media, Aesthetic Decoupling describes how power mechanics and animations are independent systems. Visuals are part of your costume. Essentially, what this means is that powers are made the same way costumes are made. The player is able to pick and choose how their powers are casted in the in-game world, whether that be by their character's hands, a magic wand, a sword, a staff, or even chainsaw or laser cannon. It’ll do the same damage, take the same time, but you get to choose what it looks like.

As mentioned previously where players will be able to choose how their powers look when their characters are to cast them, this ties into City of Titans' Props and Weapons Customization system. A huge part of a hero’s costume and powers might be a weapon: an invincible shield, magic hammer, claws, katanas, or a wizard’s staff. In City of Titans, these are called Props. All Archetypes and Playstyles have the option of choosing a Prop or no Prop at all. But if one was to choose a Prop to add a bit of "flavor" to their character, the player can expect to be able to customize animations for a given Prop. Which ties into the next, albeit brief, section below.

Players will not be forced to stick with the default animations applied to a power/power set. They will be plenty of variety and pre-made animations from a given list players can choose from. Again, the powers will still do the same damage and take the same amount of time to cast, but players can expect that they will be offered animation options that'll range from tracing an arcane symbol in the air to launch an energy wave-like attack, or merely crossing their arms for a moment before the blast is sent. The same applies to melee characters as well. A character who is a well-trained hand-to-hand combatant might choose the Fighting Prowess melee powerset. Forceful Swing, a power within that set, mechanically does physical damage to a wide melee cone, but aesthetically this could be a wide hook kick, a haymaker punch, or a series of super fast punches.

Along with being able to customize the visuals and animations of your powers, Players will also be able to pick the "emanation points" on their characters as well. An Emanation Point is where a particle effect originates on a character. These Emanation Points can come from anywhere such as the hands in order to perform the classic "energy blast" power, the eyes, a chest jewel or a piece of jewelry, a shoulder cannon, or even from pets! Emanation points can, of course, also be from a Prop: the barrel of a gun, the underbarrel of a rifle, the tip of a staff, the tip of a sword, the center of a shield, or from the ground after a warhammer has been smashed. 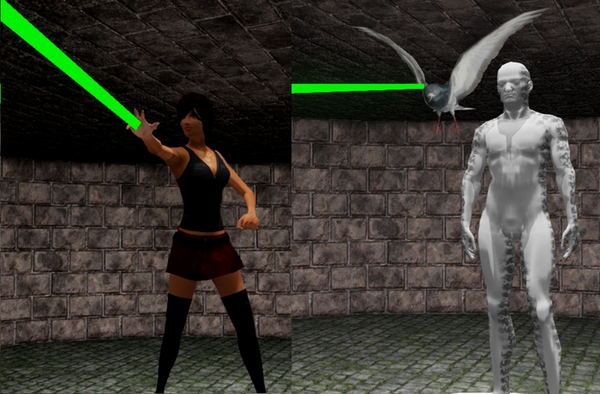